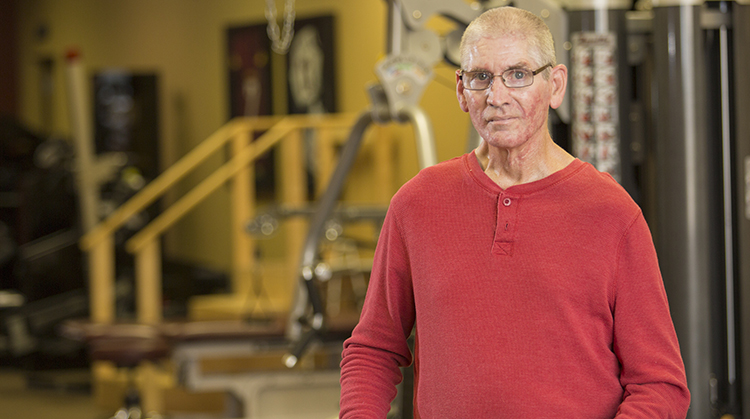 Tip Tuesday this week is brought to you by the American Physical Therapy Association.

Nate Anderson’s pain medication gets automatically pumped into his body a little bit at a time each day.

The drugs are strong—a combination of morphine (an opioid pain reliever) and baclofen (a muscle relaxer)—but then so is Nate’s pain.

“I’m probably not the worst case scenario,” Nate says, “but I’m probably in the top 10% of people who have had to use some pretty nasty narcotics to just get by on a day-to-day basis.”

In 2012, Nate was in a car accident that injured his neck. In 2016 he had fusion surgery to fortify his spine with 2 metal rods and 14 screws.

The drug pump “takes the edge off of the worst of the pain,” Nate says, but for additional relief he relies on treatment from a physical therapist.

Or at least he used to.

In September 2017, a little more than a year removed from his fusion surgery, Nate stopped receiving direct physical therapist treatment. Not because he didn’t want it. Not because it wasn’t helping. Rather, because Medicare imposes an annual cap on rehabilitation services that exceed $1,980, and Nate has reached that threshold, which could impact his ability to receive additional care.

“It’s kind of like telling someone that they can’t go to the grocery store and buy any more groceries because they already spent their allotted amount of money,” Nate says. “And to me that’s really unfair.”

The Medicare therapy cap was implemented in 1997. Over the past 2 decades, Congress has acted 16 times to create quick-fix “exceptions” so that medically necessary care can be provided above the cap, but the workarounds are disruptive and cumbersome, and people like Nate may have their care interrupted, or even not receive the care they need.

“It’s going to cause me extra pain and anxiety and depression,” says Nate, who had to give up his doggie day care business after the car accident due to pain and limited mobility. “I can do my (physical therapist-prescribed home exercise program), and that’s fine and good, but you still need to have support and people around you.”

Nate says that visiting his physical therapist, Stephanie Weyrauch, PT, DPT, near his home in Thief River Falls, Minnesota, benefits more than just his physical health. It improves his emotional and mental health, too.

“It gives you hope and drive to not only make yourself better, but to show others that you’re not just sitting back and not trying,” Nate says.

Sitting back has never been Nate’s style.

He first received physical therapy at age 2 to address the effects of cerebral palsy, which led to partial paralysis. Now 56, Nate has less than 50% use of the left side of his body, and he’s certain his mobility would be much worse if not for years of physical therapist treatment, both before and after his car accident.

“I have succeeded in a lot of things that I shouldn’t have been able to do because of physical therapy,” Nate says. “If I hadn’t had therapy, I would have been in a wheelchair and never gotten out of one.”

When Nate was a child, his father worked 2 jobs—as a college professor and cutting down trees for a logging company—to cover Nate’s “astronomical” medical expenses. Now Social Security Disability Insurance provides Nate with Medicare, but the therapy cap limits the kind of care he can receive. And Nate finds that troubling, even dangerous.

“I’m not a person that wants to live on narcotics,” Nate says. “In the beginning I even used alcohol as a means of (managing pain and depression), and that’s not a good thing either. We have alcoholics in our family, and as a result of it I’m a recovering one myself.”

What Nate wants is to continue his physical therapy, which improves his mobility while helping him manage his pain, anxiety, and depression. He shudders to think of what his life would be like without the physical therapist treatment he’s received.

“I don’t know where I’d be; I don’t want to know,” Nate says. “I’m almost certain that I would not be here today.”

Nate is sharing his story because by the end of 2017, Congress must again take action on the problematic Medicare therapy cap. Legislation to repeal the cap has bipartisan support, but that doesn’t make it a sure thing; in 2015, therapy cap repeal legislation came up just 2 votes short in the Senate.

While Congress has repeatedly taken short-term action to reduce the negative impact, the arbitrary cap on rehabilitation services remains, and Nate could be one of its victims—a label that doesn’t suit him.

“A lot of people have commended me for what I’ve been compared to what I could have been,” Nate says. “They tell me I’ve inspired them to do more themselves.”

Nate has inspired others through his active pursuit of better health through physical therapy, as opposed to passive consumption of prescription drugs to mask the pain.

To continue his journey of helping himself, Nate now needs help from Congress.

Take action to support Nate and others like him!

The American Physical Therapy Association is urging Congress to repeal the Medicare therapy cap and has made it easy for you to support those efforts. Go to APTA’s Patient Action Center and click on the link to “Support the Medicare Access to Rehabilitation Services Act” to send a prewritten letter to your representatives in only seconds.